The hook sword (fu tao) is a Chinese martial arts weapons traditionally associated with Northern Shaolin styles. Hook swords have no known origination date but antique examples date from the late Qing era (1644 to 1912). Also known as tiger hook swords (Hu Tou Shuang Gou), the weapons are similar to the jian with a hook on the end similar to a shepards crook. The guards are similar to the butterfly sword guards.

Most often the hook swords are used in pairs and forms often link the swords to extend reach when flung by the wielder.

Hook swords are a specialized weapon and reserved for advanced students. 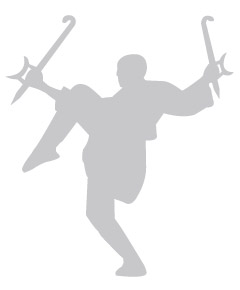