The Praying Mantis Kung Fu system started when a Chinese Martial Artist named Wong Long needed to perfect his fighting ability. By chance he observed a praying mantis in battle. As he watched, he was amazed how well it fought and protected itself and also how it easily defeated a much larger opponent. He decided to study the mantis’ techniques, and developed the trademark of Praying Mantis, the Mantis Claw (gou),a grabbing motion that derives all of its power from the wrist and forearm. Wong Long also observed the manner in which monkeys move and from that created the Mantis “monkey step”, a quick and balanced method of footwork.

Seven Star Praying Mantis Kung Fu techniques stress that one hand should be used to defend at all times. The guarding hand is kept up and centered around the front and the other hand should remain free to execute the next move whether offensive or defensive. This means that two or three movements are happening at once. This is very effective for infighting techniques. The stances and foot movements along with the hand techniques can be intricate and demanding but with practice can be perfected. Classical form is also very important to the Seven Star Praying Mantis stylist. 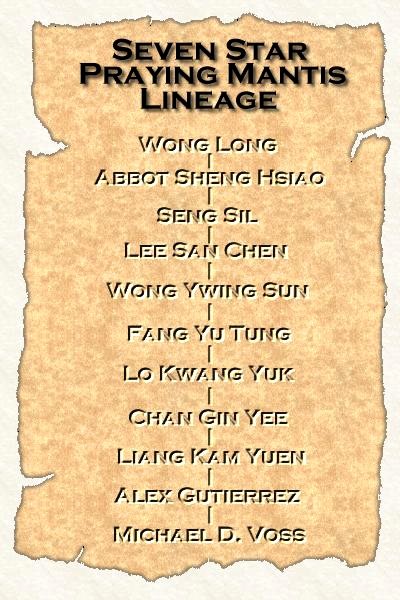